This annual sports festival is the most famous celebration across the country. It features the three manly sports: wrestling, archery, and horse racing. Naadam is celebrated across the country and every town and village holds its own wrestling, archery, and horse racing contests. The official Naadam opening ceremony in Ulaanbaatar is quite spectacular. Riders dress as Chinggis Khan’s entourage and lead a huge procession around the Naadam Stadium, which features hundreds of adults and children dressed in costumes, representing all Mongolia’s ethnic groups. In Ulaanbaatar, wrestling takes place in the main stadium, while archery competitions occur all around the structure; the famously perilous horse races are held near the Chinggis Khan Airport.

Wrestling
Wrestling is the most popular of all Mongol sports. While the sport takes place in countries all over the world, Mongol-style wrestling involves distinct rituals and techniques, which some historians claim originated 7,000 years ago.

There are no weight categories or age limits in Mongolian national wrestling. The wrestlers wear heavy boots (gutuls), a very small, tight-fitting loincloth (known as zodog and shuudag), a pair of sleeves that meet across the back of the shoulders, resembling a tiny vestige of a jacket, and a pointed cap of velvet. The contestants come out during the competition, leaping, dancing, and flapping their arms like an eagle. Each wrestler has his attendant herald. The aim of the sport is to knock your opponent off balance and throw him down, making him touch the ground with his elbow and knee. The loser walks under the raised arms of the winner as a sign of respect and unties his vest, after which the victor, again performing the eagle dance, takes a turn round the flag in the centre of the field. The victor receives symbolically important prize-biscuits and aaruul, or dried curds; once he has tasted these, he offers them to his seconds and to spectators.

Traditionally, either one thousand and twenty-four of five hundred and twelve wrestlers participate in a contest–today the latter is more common. At the National Naadam festival held in Ulaanbaatar, nine rounds are held. Those who lose in one round are eliminated from further rounds.

A wrestler who beats five opponents at the event is awarded the title of “Falcon”; one who wins seven rounds is given the title “Elephant”. A wrestler becomes a champion by winning nine rounds, obtaining the title of “Lion”, and if he wins two years in a row, he is called “Giant”. If a wrestler becomes a three-time champion at Naadam, the attribute “Nation-wide” is added to his title. A fourth such accomplishment and he is dubbed “Invincible”.

The winners of the tournament receive honorary titles and are also awarded various souvenirs. For them, however, the main award is the truly nation-wide popularity and fame that they acquire in the process.

Horse Racing
Another popular and ancient Mongolian sport, which traces its origins back to the Bronze Age, is horse racing. For the Naadam races, trainers select horses at least one month before the big day. The animals are separated from the herd, taken to an adequate pasture, and trained. Racehorses are divided into several age groups: two, three, four, and five-year-olds; over five years or adult horses, and stallions. The riders range in age from five to 12. Mongolian children are generally excellent equestrians, as many boys and girls have been riding since infancy. As the popular saying goes, “The Nomad is born in the saddle”.

Small saddles are made especially for children, but they usually prefer to ride without them. They are not only superb riders but also skilful tacticians; they know how to hold the horse back so it has enough strength to last the entire race. Competitions are not held on special racetracks, but right across the steppe, where riders are confronted with various obstacles such as rivers, ravines, and hills. The distance varies according to the age of the horse–between 15 and 35 kilometers. Riders dress in bright, comfortable clothes. On their backs, they wear various symbolic designs, which also embellish the horses’ attire. The start and the finish provide a race’s most exciting moments. Before the beginning of each contest, the young jockeys ride round the starting point three times yelling the ancient call, “Giingo!”, a kind of war-cry. When every horse steps behind the boundary line, an official gives the starting command and the riders surge forward, setting the long-awaited race in motion.

After the main Nadaam races, winning riders trot a full circuit around Ulaanbaatar’s Central Stadium, accompanied by a herald. The winning horse receives the honorary title “Forehead of Ten Thousand Race Horses”, and the five runners-up are awarded medals and are informally dubbed the “Airag Five”. Tradition dictates that the victorious riders do three laps on their mounts, on the winning horses do three laps of honour, then ride to the grandstand, where each child drinks a large bowl of airag—fermented mare’s milk. He or she (most riders are boys, but some girls have been known to compete) then pours some on his mount’s rump. The Herald, in turn, chants a poem about the virtues of the horse, its rider, and its owner. Riders who finish last also figure into the post-race ceremony. The slowest horse and his jockey make their way to the main platform after the winners have departed. Although the young boy’s face typically conveys vexation and shame, he faces no derision from the spectators. Instead, they shout encouragement and to boost his confidence, and a nationally renowned storyteller recites a special ode expressing faith in the boy’s future success.

Archery
Ample information about archery appears in historical documents dating back to the 13th century and even before. Many believe the technology for this celebrated ancient sport emerged in the region as early as 300-200 BC, but historians say, archery contests were first held in the 11th century.

Mongols use a compound bow, built from layers of horn, sinew, bark and wood. When unstrung it is not straight, but curved. Archery remains more archaic and ritualistic than the nation’s other sports.

Targets consist of small woven-leather rings (some of which are painted red), laid out on the ground in a row, several meters across. Flat targets offer a challenging exercise in gauging trajectory for the archers. In olden times, women did not participate in these contests, but in the last few decades, they have started to do so. The distance to the targets is about 75 meters for men and 60 meters for women. Men shoot about 40 arrows and must score no less than 15 points to advance in the competition; women shoot 20 arrows and must score at least 13 points using the same bow as the men.

When an arrow hits the target, a group of people standing near the target (acting as judges) raise the cry of “Uukhai!”, and make signs with their hands to indicate a hit. The archer who scores the most points wins, earning the title Mergen (Super-marksman) as a result. 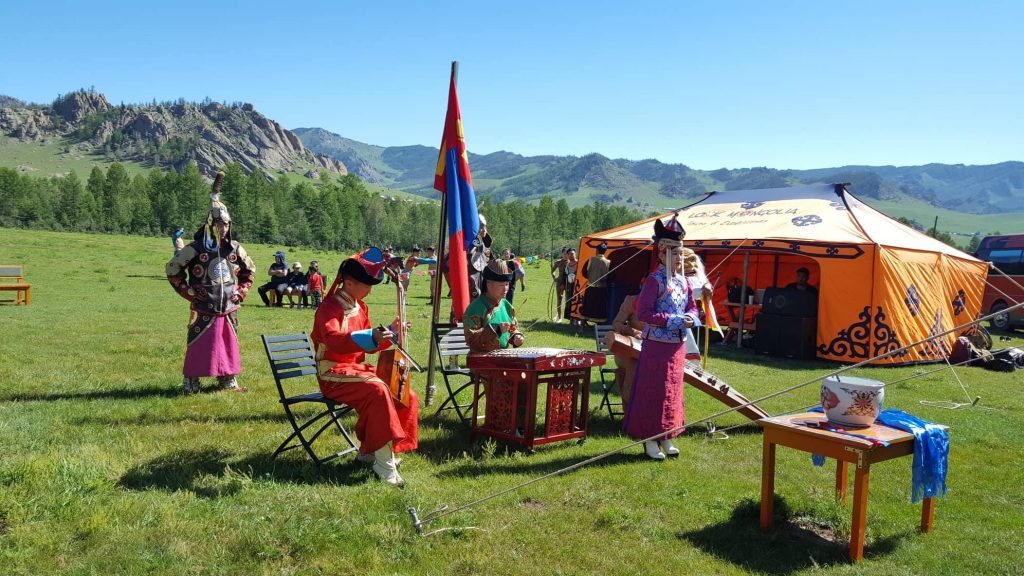 Naadam Festival Legends 7Age 3+JulAvailability 20 The most significant event of the year in Mongolia is the Naadam Festival, well

Rural Naadam Festival 11Age 3+JulAvailability 15 For many years, Naadam festival has been one of the most important cultural events